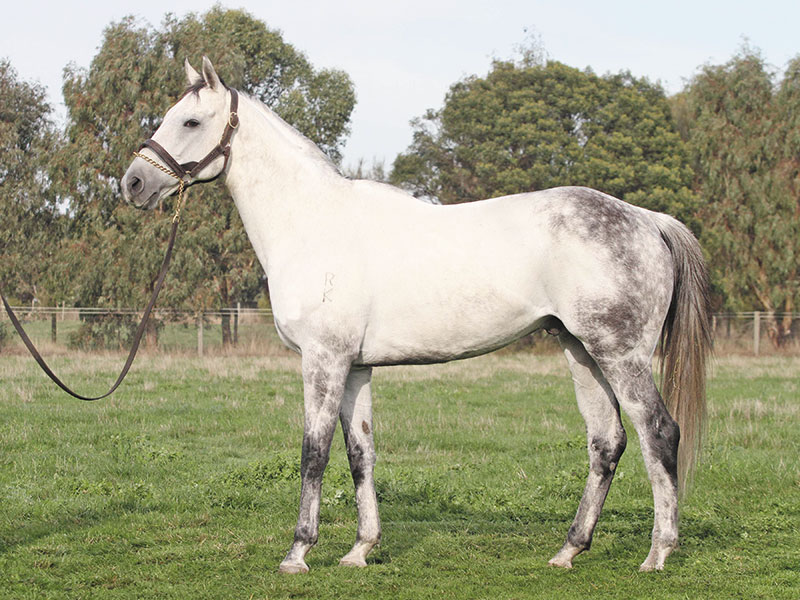 Jungle Ruler started his racing career as a 2-year-old, with his best finish a 2nd in a 1200m maiden. He saluted the judge later that year as a 3-year-old and started a wonderful journey for his connections with multiple wins coming every calendar year for the next 6 years. He was a tough, durable racehorse, that retired sound when he was 9 years old after 115 starts, 20 wins and 24 placings, amassing more than $848,000 in prize money.

He was a versatile sprinter winning from 1000m to 1600m, on all types of ground but he was well known as a bold front runner, with grey mane and tail streaming, and a catch me if you can attitude. Jungle Ruler was twice stakes placed so could mix it with the best of them.

Jungle Ruler’s sire, Lion Hunter, a Group 2 placed sprinter, sired 17 stakes winners in the 6 seasons that he stood, with a Winners to Runners strike rate of 72%. Jungle Rulers dam, Calista, was the winner of her first 2 races and was by the influential speed sire, Zedative. There is plenty of speed to burn in this pedigree. A few of the progeny of Lion Hunter that have gone on to stakes success are Leone Chiara (dam of stallions Star Witness and Nostradamus), Lovely Jubly (dam of world class sprinter Chautauqua), Ferocity (stallion - standing in New Zealand) and Gold Edition.

Jungle Ruler has now stood a number of seasons at Bombora Downs. He has produced a number of winners from metropolitan grade to country as well as from sprints to 2000m. Fillies and colts alike, his progeny are being described as tough horses with a bit of attitude.

Jungle Ruler is best placed as a “breed to race” stallion, though there has been plenty of interest when progeny do go to the sales. He is producing good workman like sons and daughters that will bring a lot of fun to their connections when they hit the race track. Jungle Ruler was a legend of the turf and was the punters pal with his grey coat and familiar red blinkers. His progeny seem to be taking a lot from their dad.